​The churchyard to St Peter & St Paul's Church is an important amenity to the village and is a public open space. In 1878 the churchyard was 'closed' and all subsequent burials in the parish have taken place at the cemetery off The Causeway.
​
The hedge to the western edge of the churchyard runs along North End and there is a wide footpath along the hedge which is a key pedestrian route, especially at the beginning and end of the school day.

The main marker of the edge of the churchyard was originally the iron railings which allowed the church to be visible from the footpath and road. At some point a yew hedge was planted along the 63m length of the railings. The date of the hedge is not known but a postcard postmarked October 1904 shows the railings and hedge. The image appears to show the individual parts of the hedge indicating it was fairly recently planted at the time of the photo. The hedge is now over 1.6m high, above the line of top of the railings blocking the view into the churchyard and the lower parts of the church forming an unwelcoming barrier.

The maintenance of the hedge and churchyard is the responsibility of the Parish Council which employs contractors to carry out the work. It is not practical to cut it lower than the top of the railings using machinery and it would be prohibitively expensive to have it cut at lower level by hand. Large parts of the hedge are now in poor condition with large gaps (see images). These areas are mainly under the mature horse chestnut trees which line the verge of North End outside the church and which deprive the hedge of sunlight and rain. This means that that replanting is unlikely to be successful. The hedge is against, or through, the railings along its entire length preventing any painting or maintenance of the railings which are now rusty and unsightly. In a few places there is damage to the railings that needs to be repaired but access is not easy because of the hedge. Although the churchyard is a haven for wildlife the hedge is monoculture and so is not ecologically valuable.

The hedge is in poor condition and prevents maintenance of the railings. 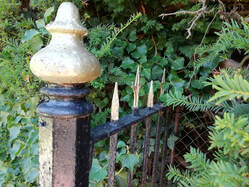 The refurbished railings by the main gate to the churchyard.
What work is planned?
In 2021 we are planning the following:
Consultation
As part of the process for obtaining permission to remove the hedge (see below) we carried out a public consultation in December. This include notices on all key noticeboards in the village and a full page notice in the December/January issue of the Village Voice.

​What permissions are required?
There are no permissions required for the renovation of the railings and the ecological improvements that are currently proposed. The removal of the hedge requires compliance with local authority and church authorities procedures. These are: